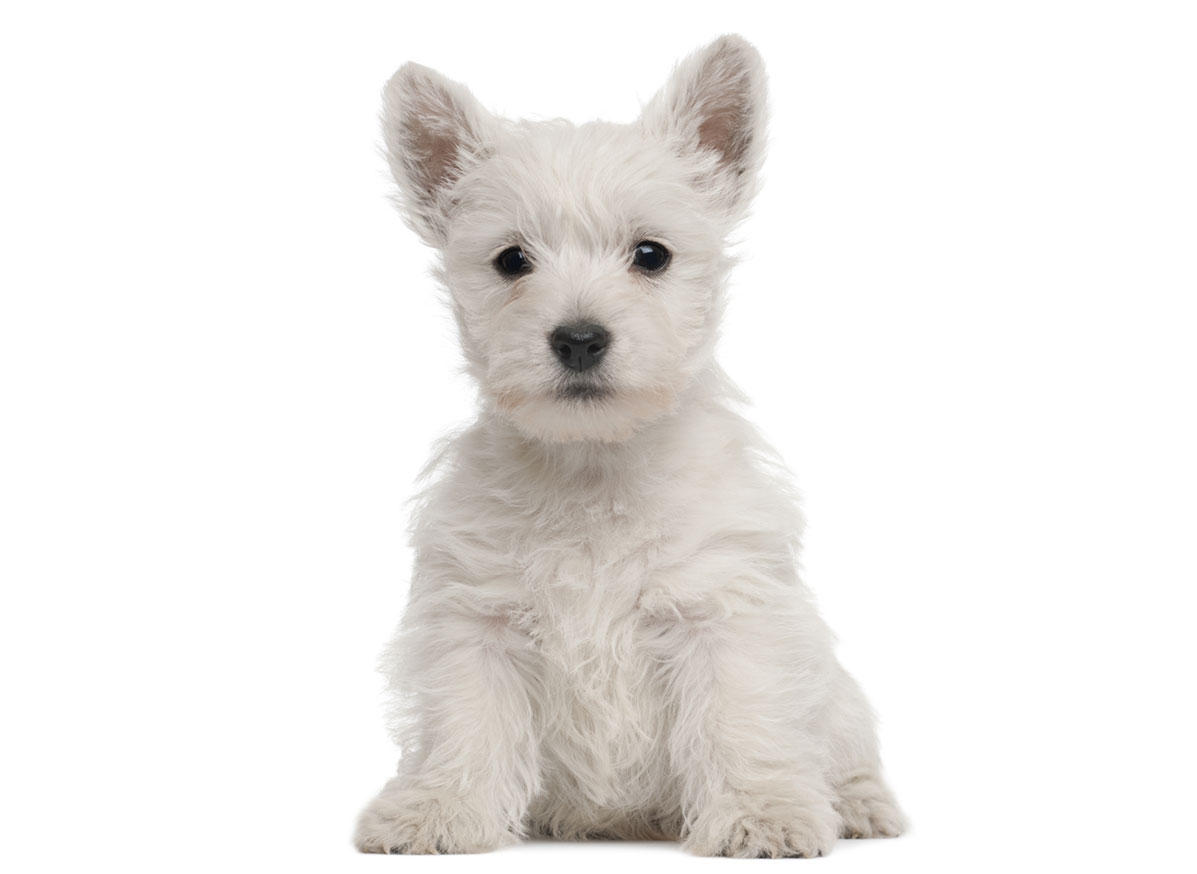 The West Highland White Terrier (affectionately known as the Westie puppies) will never cease to entertain you with his antics, woolly coat, and self-assured strut. Find out why so many families consider the Westie to be one of the besties right here... 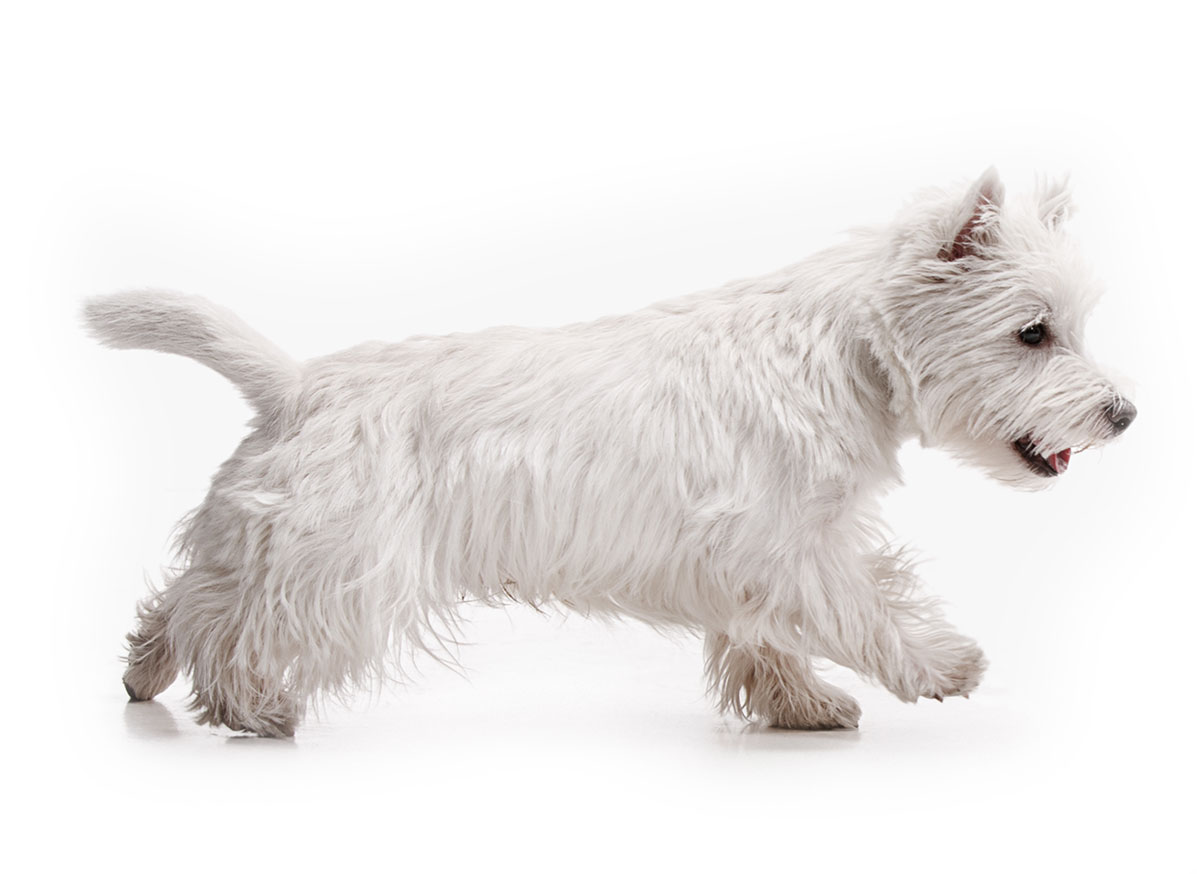 The Westie’s mischievous grin is all part of the fun—this dog is known for his playful and energetic personality.

The Westie is a highly trainable and intelligent dog who will surprise you with how quickly he can learn new commands.

Just look at that face! Westies are one of the most Instagram-able dog breeds in the world—take our word for it!

Although Westies do need regular exercise (as do most breeds), their size makes them well-suited for apartment life.

When they’re not cuddling on the couch, Westies make great partners for all sorts of outdoor adventures.

Westies are highly affectionate with their family, making them an ideal pooch for families of all types. 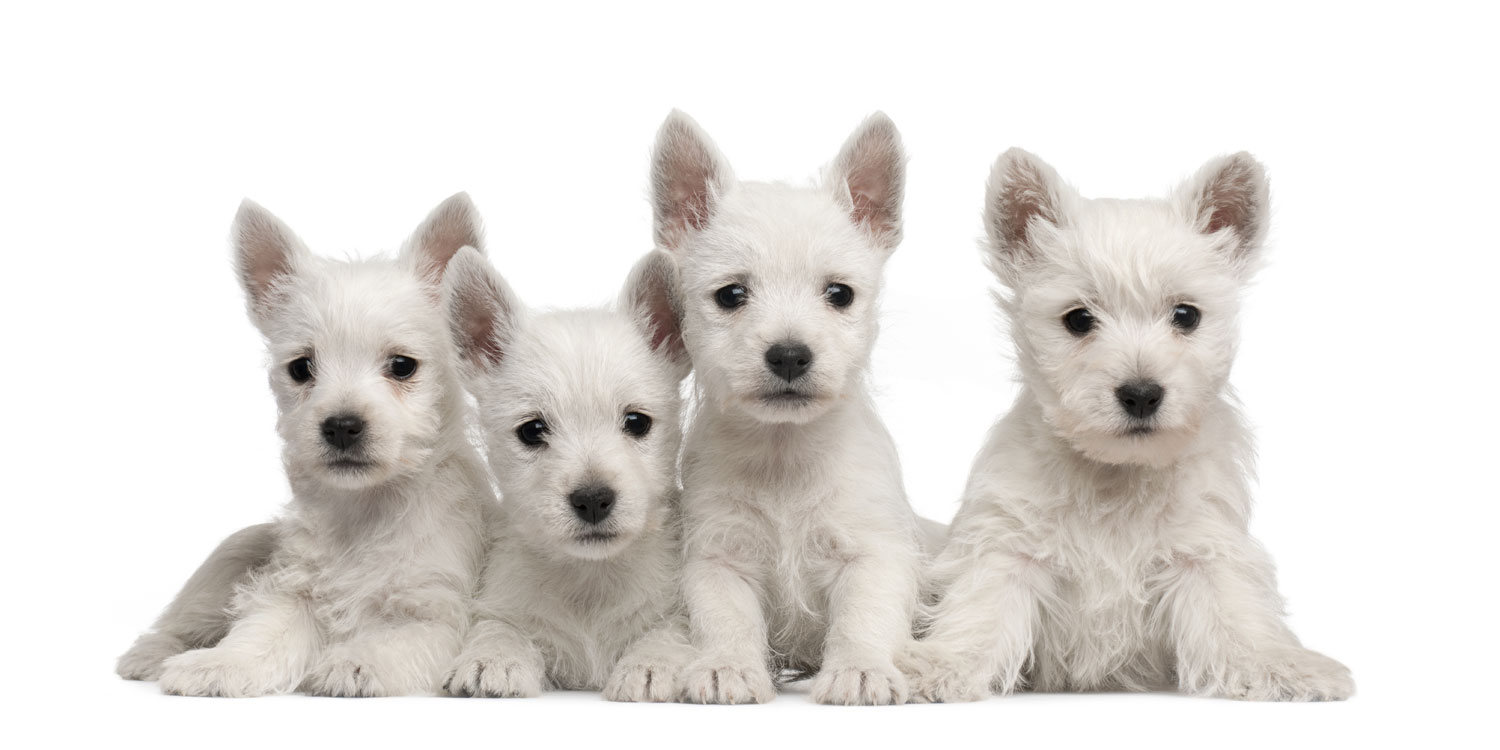 Finding the perfect White Terrier puppy has never been easier. 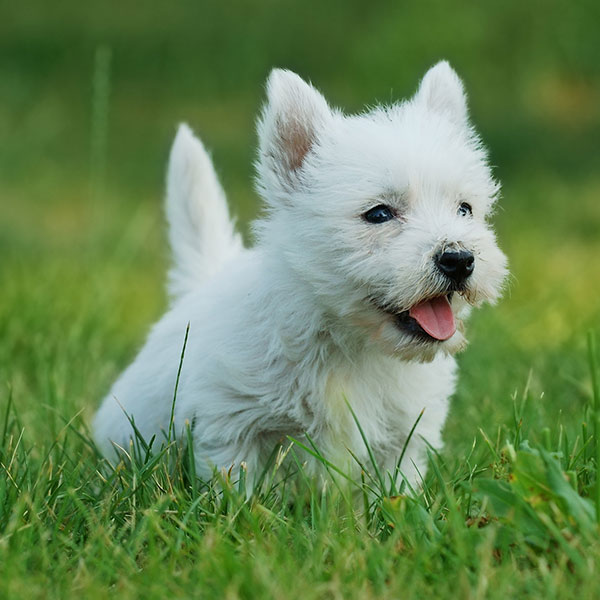 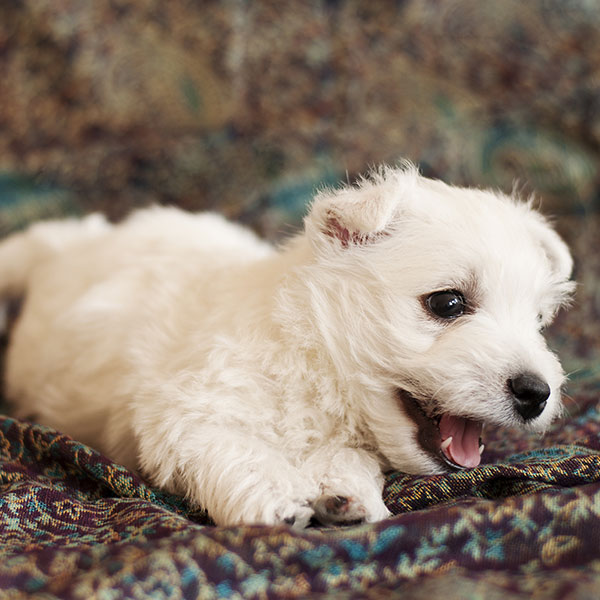 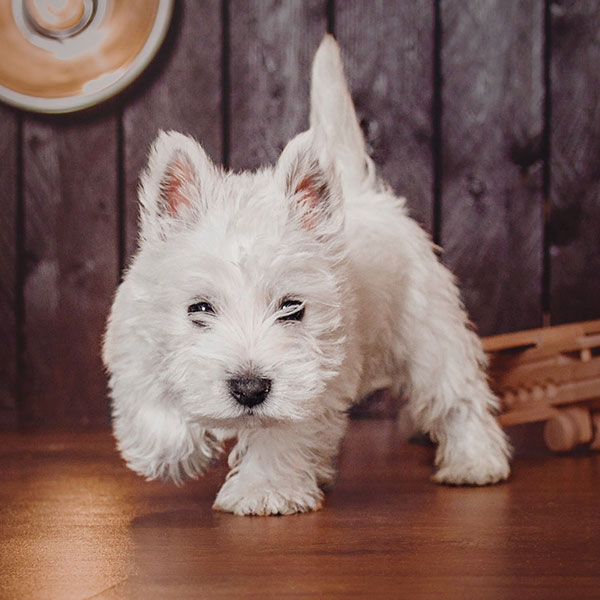 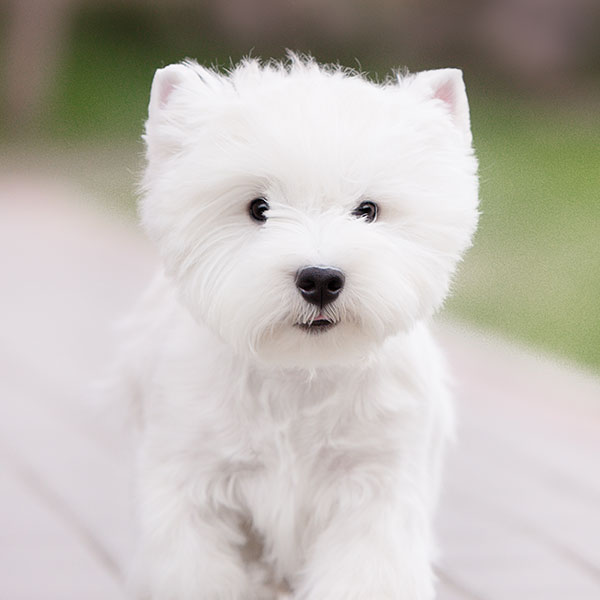 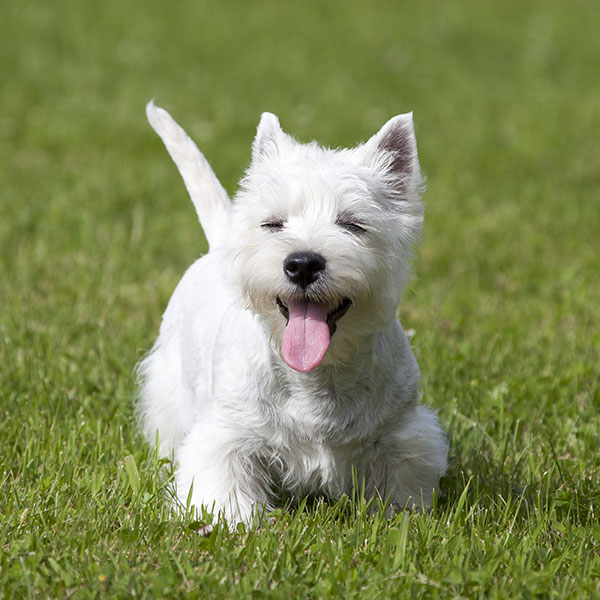 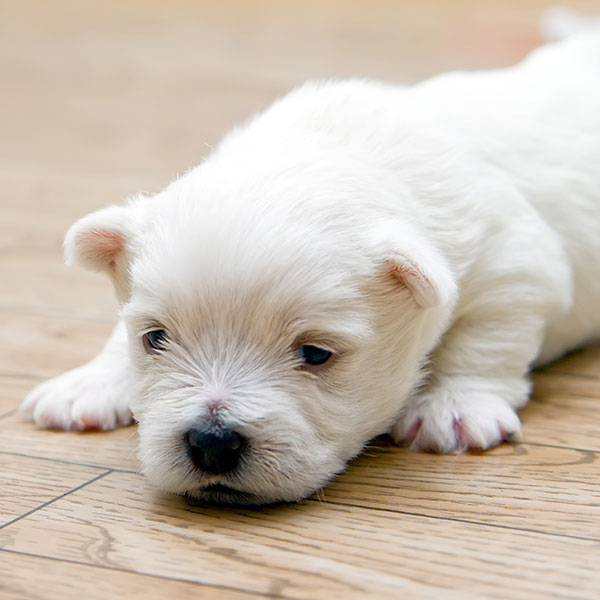 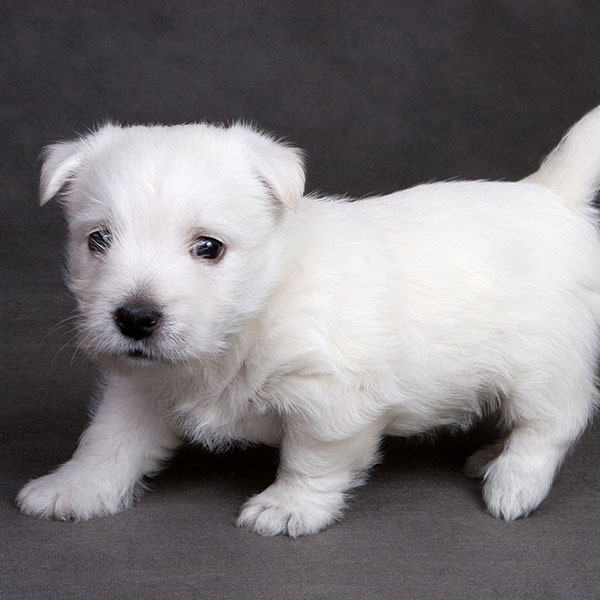 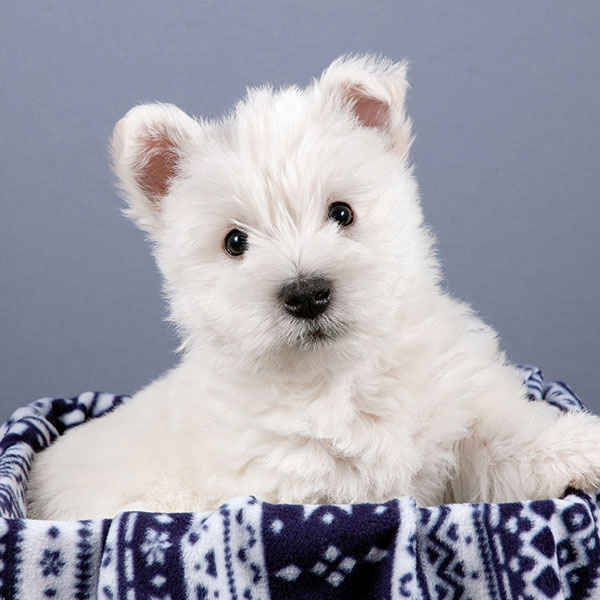 We only work with White Terrier breeders who pass our 47 breeder standards. Here are a few of them... 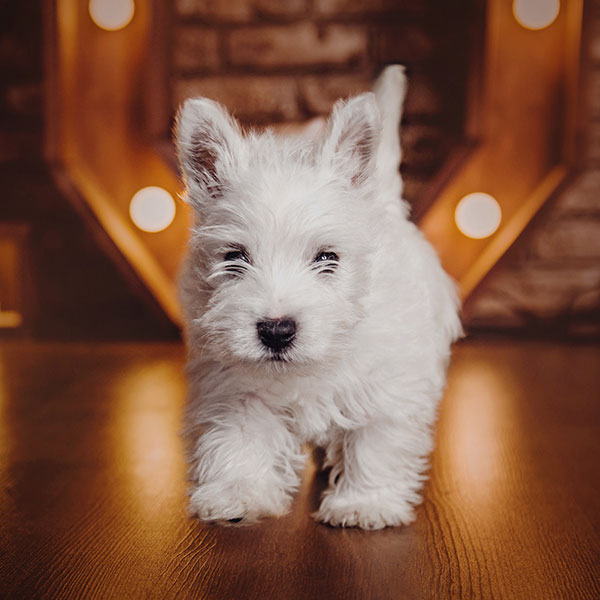 Questions about West Highland Terrier puppies for sale in New York? We have answers.

How much are West Highland White Terriers puppies for sale in New York?

Since they're pretty small dogs, West Highland Terriers for sale New York don't tend to need the same amount of exercise as, say, a Labrador or Golden Retriever. However, they're still pretty active and energetic, so will need daily walks and regular playtime. Make sure you can meet the needs of a New York West Highland Terrier for sale before buying one, as these dogs can get bored and frustrated if they're cooped up all day long.

What kinds of food should I feed to my Westie?

If you speak to different breeders and Westie experts, you'll hear a lot of different answers about which foods are the best to feed them. The truth is that all dogs are different, including West Highland Terriers for sale in New York, so you need to take the time to get to know your pup, finding out what it likes, what it doesn't like, and then choosing the correct food accordingly.

What is the difference between purebred and mixed breed dogs?

Purebred dogs have parents of the same breed. So, New York West Highland Terriers for sale are purebred, as each authentic Westie pup should have a Westie mom and a Westie dad. Mixed breed dogs, meanwhile, can have parents of different breeds. So, a Chestie, which is a cross between a Westie and a Chihuahua, is a mixed dog.

What's the origin story of this breed?

As you might be able to guess from their name, West Highland Terriers were first created in the beautiful Scottish Highlands. Many years ago, these dogs would have been used for hunting and killing mice and rats, but in the modern era, they're less likely to be found hunting and more commonly spotted as beloved family companions.

What should I expect from a Westie puppy for sale in New York?

Thinking of getting your own New York West Highland Terrier puppy for sale? Well, if so, you should know that these little guys are some of the cutest pups around. They're surprisingly smart too, as well as being quite curious by nature, and they like getting outdoors, exploring the world, and meeting new people. They can live for over 15 years too, and you'll have the best chance of finding a healthy dog with a long life expectancy if you buy from vetted West Highland Terrier breeders in New York.

How do I use Uptown to find a Westie puppy in New York?

We're here to help you find a West Highland Terrier New York as simply and seamlessly as possible. To begin, take a look at all the currently available West Highland Terrier puppies in New York and other locations, all across the country. All of the featured sellers on Uptown have been vetted and approved, so you can confidently buy from any one of them without any issues.

What does Uptown Puppies think about transparency?

Is this a good site for finding the cheapest West Highland Terriers?

The New York West Highland Terrier breeders on Uptown offer fair, competitive prices, but they aren't really in the business of offering the 'cheapest' dogs. Instead, they aim to be the best option for true dog lovers, upholding the highest standards of ethical breeding. When you buy a West Highland Terrier for sale in New York on Uptown, you'll be getting a healthy dog from a source you can trust, with clear communication and no nasty surprises.

Shouldn't I get a shelter dog instead?

If you're looking for a specific breed to meet your needs, like West Highland Terrier puppies for sale in New York, finding what you want from a shelter could be difficult. That's where we come in. However, as dog lovers ourselves, we fully support the inspiring work being done by reputable shelters and rescue centers across the nation, and we encourage everyone to think carefully about whether they want to get a rescue dog or a new puppy.

Will my West Highland Terrier be healthy?

Of course! The vetted breeders and businesses of the Uptown network will always offer to carry out nose-to-tail health checks on all of the West Highland Terrier puppies New York they sell, giving you total peace of mind every time. We also encourage you to take your new pup for a check-up with your own local vet, once it's settled in.